You are here: Home / Ministry and Church / Rules for the Classroom…or Life 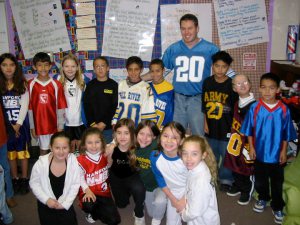 In a recent sermon I mentioned my “Team Expectations” (aka classroom rules) from when I taught. Katie shared them on Facbook saying “They could also be rules for the home or life in general.” In response to some requests for them, here they are exactly as they were posted in the back of my classroom with brief explanations below each…

The world acts like lying is no big deal. Lying is even expected in some circles (politics). But lying is one of the six things God hates according to Proverbs 6:17. I wanted my kids to know that.

Also included in this rule is what I called, “subtle brags” or bragging when you’re acting like you’re not. In real life it looks like being the hero of your own stories, and on Facebook it looks like:

3. Be nice – say and do things that help your teammates: compliment, encourage, clap and cheer for them.

Kids are naturally competitive and jealous. The solution is to encourage them to rejoice when others succeed.

1 Thessalonians 5:11 Encourage one another and build each other up.

4. Do not say or do anything that might hurt someone’s feelings.

Usually this is worded like, “Do not say anything mean.” The problem with that is the word mean is subjective. All year you’ll have to listen to kids saying, “I didn’t say anything mean” or “I didn’t mean to be mean.” But when another kid is crying they can’t say, “I didn’t hurt his feelings.”

Ephesians 4:29 Do not let any abusive language come out of your mouth, but only what is helpful for building others up according to their needs.

5.    Apologize if you hurt someone’s feelings…

I could write a completely different post about apologizing (and maybe I will), but for now I’ll just say most people don’t know how to apologize. If your apology sounds like, “I’m sorry BUT…” or “I’m sorry YOU…” it’s not an apology; it’s an excuse disguised as an apology.

I wanted to start teaching kids early the right way to apologize. If people have hurt you and you were looking forward to an apology but heard, “I’m sorry you’re mad” then you probably wish that person had a teacher with this rule.

James 5:16 Confess your sins to each other.

6. Do not shift blame to someone else for your actions – YOU are completely responsible for all of YOUR actions.

99% of the time when kids get in trouble, the first word out of their mouths is the name of another student or the pronouns he, she, or they:

It began at The Fall when Adam and Eve were confronted:

In a few words, Adam blamed God and Eve, and with nobody else to blame Eve said, “The devil made me do it.” The moment sin entered the world and man received a sin nature, with it came the terrible habit we all have of shifting blame.

I wanted to try to prevent that in my classroom as much as possible.

7. Do not whine, moan, groan, complain or roll your eyes.

We all do this – myself included – and the people who say they don’t are breaking the first rule.

Philippians 2:14 Do everything without complaining or arguing.