You are here: Home / Types and Shadows / Nine Ways Abigail Is a Type and Shadow of Jesus Christ 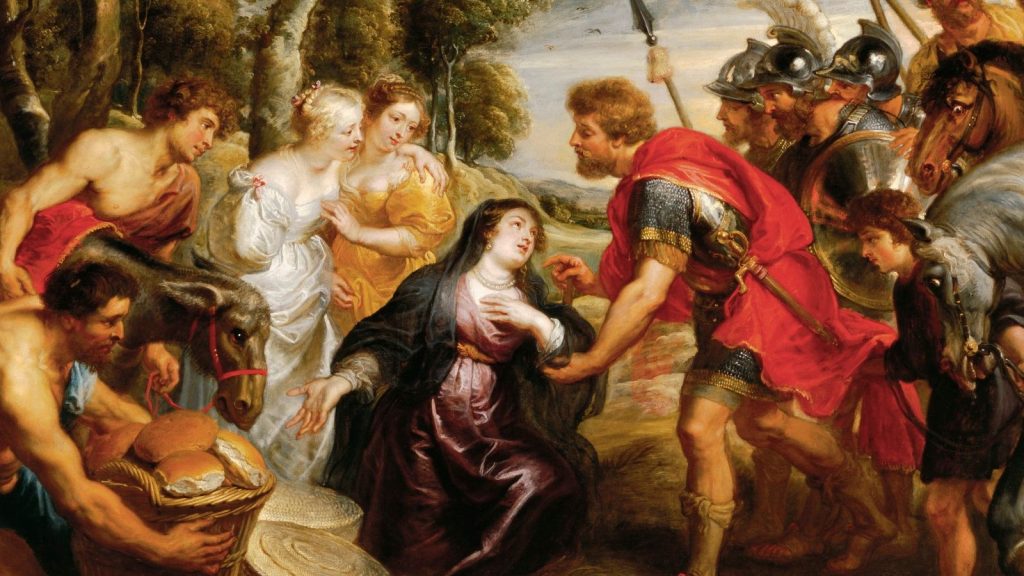 When we think of types and shadows of Jesus, the Bronze Serpent (John 3:14), manna (John 6:51), rock in the wilderness (1 Cor 10:4), or certain individuals like Joseph, Moses, David and Solomon probably come to mind. But Abigail? Probably not, but she should!

Jesus is our propitiation. Since this isn’t a word we use often here’s a simple definition: a gift, offering or sacrifice meant to turn away the wrath of an offended individual. The closest English words would be appeasing, expiating, placating, pacifying, or satisfying.

Here are two examples of propitiation in the Old Testament to give you an idea what it looks like:

Another example of propitiation takes place in 1 Samuel 25. David helped Nabal, he responded to David’s kindness by insulting him. David was so angry, he told his men:

Then Abigail made haste and took two hundred loaves of bread, two skins of wine, five sheep already dressed, five seahs of roasted grain, one hundred clusters of raisins, and two hundred cakes of figs, and loaded them on donkeys.

[She told David] “And now this present which your maidservant has brought to my lord, let it be given to the young men who follow my lord.”

Like Jesus provided an offering on our behalf: Ephesians 5:2 And walk in love, as Christ also has loved us and given Himself for us, an offering and a sacrifice to God for a sweet-smelling aroma.

She fell at his feet and said, “On me alone, my lord, be the guilt. Please let your servant speak in your ears, and hear the words of your servant. “

For He shall bear their iniquities.

To learn more about types and shadows, watch this message I delivered as a guest preacher about Jonah revealing Jesus…

Nabal is a picture of the devil:

Please, let not my lord regard this scoundrel Nabal. For as his name is, so is he.

The Hebrew word for “scoundrel” is bĕliya`al, which is why the King James Version says, “Belial.” This is a name for the devil in the New Testament:

And what accord has Christ with Belial? Or what part has a believer with an unbeliever?

Nabal died after he learned about Abigail’s intercession:

In the morning, when the wine had gone out of Nabal, his wife told him these things, and his heart died within him, and he became as a stone. And about ten days later the Lord struck Nabal, and he died.

Similarly, Jesus’ intercession on the cross resulted in Satan’s defeat:

Having disarmed principalities and powers, He made a public spectacle of them, triumphing over them in it, that is the cross.

Please forgive the trespass of your servant. For the Lord will certainly make my lord a sure house, because my lord is fighting the battles of the Lord, and evil shall not be found in you so long as you live.

Then Jesus said, “Father, forgive them, for they do not know what they do.”

David said to Abigail, “Blessed is the Lord God of Israel, who sent you this day to meet me!”

Like the Father accepts the Son as an Intercessor:

For there is one God and one Mediator between God and men, the Man Christ Jesus.

David said, “Unless you had hurried and come to meet me, by morning light no males would have been left to Nabal!”

For God did not appoint us to wrath, but to obtain salvation through our Lord Jesus Christ.

David said, “Go up in peace to your house.”

Without Abigail there would have been judgment on Nabal, but Abigail established peace between he and David.

[Jesus] made peace through the blood of [the] cross.

David said, “See, I have heeded your voice and respected your person.”

A voice came from heaven, saying, “This is My beloved Son, in whom I am well pleased.”

Ninth, Abigail was elevated to a position of honor.

When the servants of David came to Abigail at Carmel, they said to her, “David has sent us to you to take you to him as his wife.”

After Abigail’s work, she became David’s wife. She sat next to him as Jesus sits at the right hand of the Father.

Discussion Questions to Answer in the Comments Section